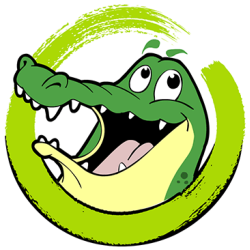 Hi! I'm CraftyCroc. I love chalk markers and anything arty and crafty. I've been around since the dinosaurs but am hip and cool and up with the play!

I love finding and sharing great ideas for crafty projects and particularly keeping the kids inspired. Feel free to drop me a line and thanks for reading!

The Rio 2016 Oylmpic games are upon us! The excitement of the opening ceremony has taken hold here at CraftyCroc and we are getting behind our awesome atheletes.

So we thought it would be fun to incorporate the Olympics in some of our activities. We came across some amazing sidewalk chalk art by Michelle, who blogs at Burgh Baby, and decided to share it with you.

These images are of sidewalk art but wouldn’t it be fun to create some of these on your chalk wall (sealed of course) using your chalk markers? Be sure to take some great photos!

Your child could pretend to be one of the 5 men and 5 women gymnasts representing the USA and competing for gold in the Rio Olympics. If doing this on a wall try drawing it upside down so your child can stand on the floor and reach for the beam to make an awesome photo.

This is very cool and would look great adapted for your chalkboard wall. Why not have your child pose with a real soccer ball?

Get those muscles out. And don’t forget the sunglasses for maximum effect!

This archery scene will be a hit. Make sure you use bright colors to make the image really pop.

This little guy looks like he could take on the world. Its all about attitude.

Ok, so this image is not specifically Olympics but diving is an Olympic sport so I think we are justified. Besides this diving image is just adorable! How could we not add it in here. We love the little one in the inflatable duck. The sunglasses are the finishing touch.

But why stop there? Here are some other ideas for Olympic themed images.

Why not create a winners podium for your kids to climb on?

Why not create a volleyball theme? Or create a swimming pool with race lanes?

Other sports could include: